Trimethylglycine was originally referred to as betaine since it was discovered in sugar beets during the 19th century. It was the first betaine discovered and is an organic compound that occurs in plants such as in broccoli, spinach, grains, and shellfish. Generally, Trimethylglycine serves its purpose by decreasing high levels of the amino acid homocysteine, which is a risk factor for having heart diseases and stroke. In addition to that, Trimethylglycine may help with the treatment of Homocystinuria, a hereditary condition that causes homocysteine to accumulate in the blood at toxic levels. This condition has been associated with excessive tiredness, abnormal bone development, weak bones, and blood clots. On the other hand, researches have found that Trimethylglycine may have hepatoprotective properties and could prevent fatty liver deposits due to chronic alcohol use, insufficient protein intake, obesity, and diabetes. It is also known as Betaine, TMG, Glycine betaine, oxyneurine, lycine. 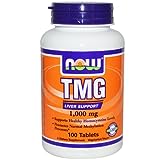